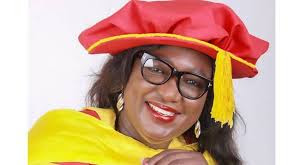 The New Vice- Chancellor of the University of Calabar, Prof. Florence Banku Obi, has called on the general public to disregard the fake phone number registered in her name as “Prof. Florence Obi”. The fake phone number is 07049014211
The VC, who said her attention was drawn to a fake phone number where the user was using to demand money from members of the public for jobs and contracts on Facebook and WhatsApp, frowns at such acts which she described as dubious and fraudulent.
“This is therefore to inform the general public that the phone number 07049014211 which was registered in my name does not belong to me.
“I have received several calls from close friends who said the user of the fake phone number demanded money from them for employment and contracts in the University of Calabar. The said number does not belong to me. I want to use this medium to tell the general public not to do any business or transaction with the fake number registered in my name as anyone who does so is at his or her own risk”.
“The fraudster goes about promising jobs, contracts, favours, connections among others,” she said.
She said that security agencies have been detailed to do the needful and anyone caught will face the wrath of the law.