“Am Surprised ASUU is still on strike”- Buhari 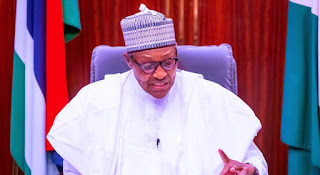 The President, Major General Muhammadu Buhari (retd.), has expressed displeasure over the ongoing strike by members of the Academic Staff Union of Universities.
He described as “amazing” the failure of the lecturers to suspend their eight-month strike.
The president was quoted as saying this in a statement by his media aide, Garba Shehu, after a meeting with 36 state governors on insecurity.
The statement was titled, President Buhari charges governors to work with traditional rulers for local intelligence’.
On the eight-month-long strike by the Academic Staff Union of Universities, the President was quoted as saying “lecturers had not taken into consideration the larger challenges facing the country”.
“Government conceded something. The problem is that they refused to look at the problem of the whole country.”
“The Minister of Labour is working hard at it. It is amazing how ASUU will stay out of classrooms for so long. There’s a need for our elites to understand the challenges facing the country,” the president added.
ASUU has been on strike since March 2020 over demands for more funding for public universities and renegotiation of the 2009 FG/ASUU agreement.
Others are outstanding earned academic allowances, the proliferation of universities by state governments and the constitution of Visitation Panels to Federal Universities.
ASUU also opposed the Integrated Personnel and Payroll Information System used in settling workers salaries by the FG and instead, developed the University Transparency and Accountability Solution which is currently undergoing test-run by the National Information Technology Development Agency.The Senior Staff Association of Nigeria Universities and the Non-Academic Staff Union had also proposed the University General and Peculiar Personnel and Payroll System in place of the IPPIS.