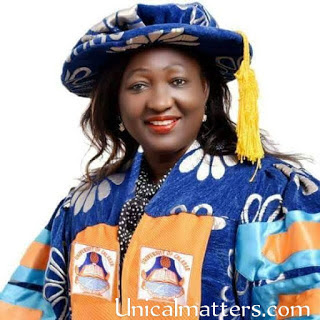 The new vice Chancellor of the University of calabar who was sworn into office on the 1st December 2020 made a lot of promises in her Investiture speech during her inauguration.
Today Unical Matters would be highlighting some major promises ad pledges she stated in her Investiture speech that would lead to the development of the 45 year old institution.
The following 10 Promises are what staffs and Student’s of the University of calabar should look out for in the next 5 years of her tenure. 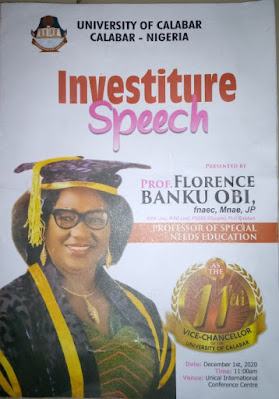 1. She has promised to maintain cordial relationship with various unions on campus.
2. She stated that the welfare welfare of beloved Students would be Paramount in her administration therefore hostels and lecture halls would be furnished for efficient learning.
3. She promised development of hostels facilities through partnership with private investors.
4. She said In her administration, recreational and extracurricular activities would be given a prime of place especially malabor world cup and Student’s week.
5. She stated that she would Institute vice Chancellor’s honours list to encourage Students who are doing excellently well in their programmes, the VC’s honours list shall be displayed on a dedicated billboard to motivate Students.
6. Determined pursuit of a renewable source of energy like solar power exploitation and exploring hydro-electric power through the great kwa river which lies by the boundary of the University.
7. Seminars would be held for development of lecturers on the fundamentals of effective teaching and adaptation of new trends like online lecture delivery.
8. She promised to maintain cleanliness of the school, ensuring proper landscaping and greening of the University.
9. Owing to the security challenges and cases of kidnapping of lecturers on campus she promised to enhance the security architecture of the University. To ensure this there shall be full automation of the security unit and biometric capturing of Students.
10. Prof Florence banku obi who has promised to use the carrot and stick approach to increase productivity also said she would tackle corruption in the university and put and end to looting and mismanagement of funds.