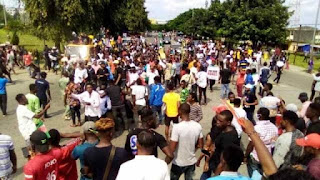 Following the uncovering of about 7 warehouses in different locations in calabar where covid 19 palliatives were stored yesterday Friday 23rd if October,  Hoodlums have broken into several Public and private institutions in calabar.
After the raiding Of warehouses yesterday, the Chronicles office was also raided and set ablaze, Calabar discount City Mall said to be owned by the wife of the former governor of Cross River State, Mrs obioma imoke was raided and all items carted away with, also  that same night first bank at 8 miles was burnt down.
The Unrest continued this morning as several Public and private firms have been raided including the University of calabar which is now under control by security agencies.
So far today this is the list of institutions arrond calabar that had been destroyed
Access diamond Bank at mayne avenue
Calabar bulavaad joint Cold Stone creamery
Senator gershom bassey’s family house, INEC office
NLC office
WAEC office
NDDC office
Atakpa police station
Mtn office Etta Agbor
Ibedmore and other phone shops in calabar
There are also rumours that the only shopping mall in calabar, spar was also raided.
In the university of calabar it has been rumoured that ICT centre, graduate school and faculty of Agriculture has been raided although security agencies arrived early to control the situation

Strike may continue for years if demands are not met - ASUU