by admin
in Gist
0
585
SHARES
3.2k
VIEWS
Share on FacebookShare on Twitter
American based and Nigerian born physician Dr. Stella Immanuel, a General Practitioner in the United States recently stated that she has treated over 350 patients of COVID-19 with a combination of Hydrochloroquine, Zinc and Zithromax.
The Cameron-born and Nigerian trained physician is trending on social media after delivering a speech on COVID-19 in the U.S. on Monday.
She said at a news conference held by a group of American doctors under the aegis of “America’s Frontline Doctors” in front of the U.S. Supreme Court
In a statement signed by the President of GMD, Prof. Olufemi Babalola in Abuja on Tuesday, the body said: “there is no scientific evidence to prove the claim.”
Stella Gwandiku-Ambe Immanuel was born in 1965 in Cameroon.
She reported an interest in becoming a doctor from the age of four, Immanuel attended Cameroon Protestant College, a secondary school in Bali, Cameroon. She graduated from the Nigerian medical school at University of Calabar in 1990 and moved to the United States in 1992.
Immanuel completed a pediatric residency at Bronx-Lebanon Hospital Center in New York City.
On July 27, 2020, Immanuel appeared in a Tea Party Patriots-backed press event by a group known as “America’s Frontline Doctors in front of the steps of the U.S. Supreme Court. 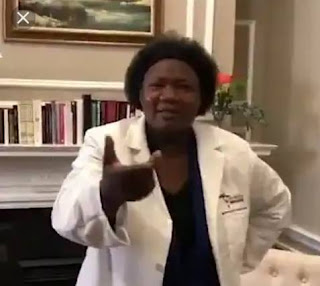 She claimed that she had cured COVID-19 in 350 patients at her clinic using a combination of hydroxychloroquine, Zithromax, and zinc (a claim not supported by any strong scientific research; there is currently no drug approved as a specific cure for COVID-19), and that public health measures such as the wearing of facial covering and social distancing were unnecessary.
Her videos which spread across all social media platforms has been viewed more than a million times before all social media platforms took down her videos for misinformation.
Dr. Stella right now is been labelled as one who spread false medical advice and cures as stated in her bio on Wikipedia.
Dr. Stella who still stands on her point has alerted the covid 19 patients about taking down her video on social media platforms, she has encouraged patients who have been cured by the drugs to upload their testimonial video using hashtag #Hcqworks.