The issue of rape has been trending recently on social media after a 22 year old Student from the University of Benin (uniben) gang raped and beaten in her local church where she went to read.

Uwaila Omozuwa, is a 100-level Microbiology student of UNIBEN, she goes to read everyday at The Redeemed Christian Church of God, Edo Province 10, Ikpoba Hill, Benin, but was unfortunately beaten, raped and hit with a fire extinguisher by unknown men on Wednesday ,27th May, 2020.

She was found in a pool of blood by the church security officer laying lifelessly beside a fire extinguisher which was used to bash her face she was immediately rushed to the University of Benin teaching hospital where she later died. Students have been protesting using the hashtag #justiceforuwa 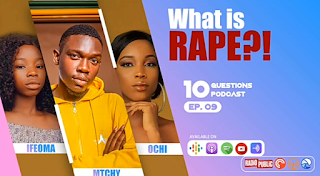 The 10 questions podcasts anchored by Mtchy a 300 level unical Student from the department of civil engineering held a recent podcast episode titled “what is rape?” Just to speak on the current situation. This podcast featured ifeoma a student of the Lagos State University (LASU),she  is also Nigeria’s SDG ambassador for clean water and sanitation and Ochi a 300 level Student of the department of linguistics, University of calabar.
SEE ALSO: CULTISTS KILL UNICAL LECTURER AT STAFF QUARTERS
Speaking about rape, this Students said rape shouldn’t be gender based simply because the females are the weaker sex, every gender should be protected from rape, “the boy child” as Ochi stated can also be abused and if it were to be a boy that was raped, the issue may just be swept under the carpet, she added that the male child don’t get as much representation as the girl child giving an instance where a 9 year old boy may be abused by his aunt.
Listen to the full podcast below
Previous Post